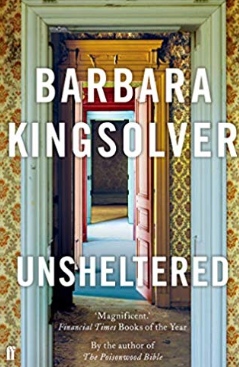 Read it. This is a story for our times. The message of Unsheltered is like a piece of bright cloth draped over the plot horse. The bones of the horse stick out in unexpected places, but come and get on. It is worth the ride.

I am a Kingsolver fan. The Poisonwood Bible and The Lacuna are two of my favourite novels so when I saw Unsheltered in my local bookshop, I bought it with that sense of almost physical pleasure that you get from a new book by an author you love.

Speaking of the physical – the cover was designed to be touched. It has raised letters and I remember the feel of them even as I write this. You know – the way you can slide your fingers backwards and forwards over the raised bits on the cover in preparation for opening the book and jumping into it. Or when you’re in the middle of reading and you look up for a minute to think about things.

Set in the States towards the end of Obama’s time in office, the story is about a professional family (academic husband and out-of-work journalist wife) who are down on their luck as they move towards the end of their working lives. Their house is falling down and will cost too much to repair. Interwoven is a parallel story about a man, Thatcher Greenwood, and his family who lived in the same place over a century earlier. Thatcher also lived in fear of losing his shelter.

As a science teacher, Thatcher’s difficulty was in convincing his school and local community of Darwin’s theory of evolution. This seemed to them to go against the story of God’s creation. His friend and neighbour, Mary Treat, a scientist whose story is based on fact, was one of the few people he could talk to.

The parallel story, over a century later, is that of Tig (short for Antigone), the narrator’s daughter, who tries to convince her family of what she believes. She tries to get her mother to see the world through her eyes and to see the way forward for coping with the changing times.

Here are two interwoven stories – over a century apart – that tell the same tale of how neither evidence nor rational thought seem to affect people’s beliefs.

This is an ambitious novel and in her attempts to make all points of view understandable, Kingsolver does not always succeed. It is hard to sympathise with grandfather Nick, a racist who is unpleasant to his granddaughter’s boyfriend who helps to care for him. It is difficult to like Nick even though he is dying and even though Tig, the lovable granddaughter is always tolerant of him. In fact, Tig’s understanding towards Nick sometimes feels unbelievable.

The story was slow starting for me, not because there was a lack of events but because it took me time to relate to the characters. Eventually, I became engrossed in the story of the mother and daughter relationship that gradually unfolds. It is the story of this relationship that redeems whatever slight shortcomings of forced plot or unbelievable relationships the family members have with grandfather Nick.

I admire Barbara Kingsolver for attempting to make Nick understandable because there are many people who think like Nick does. They are not bad people but because of what they say, it is hard for people who hold opposing views to look any deeper – unless the people like Nick are members of their own family. Kingsolver shows Nick as a beloved member of the family despite his views.

I think that any mother will relate to the mother narrator in the story and her attempts to come to terms with the relationships with her children both son and daughter. The daughter, Tig is the most lovable character, but the mother is the most relatable.

I travelled through this story and came out at the other end, enriched in surprising ways. Like all good stories, you are left with a question: is being without shelter a chance to see blue sky without the surrounding crap or is it the harbinger of global disasters where we shall all be unsheltered, vulnerable and desperate?